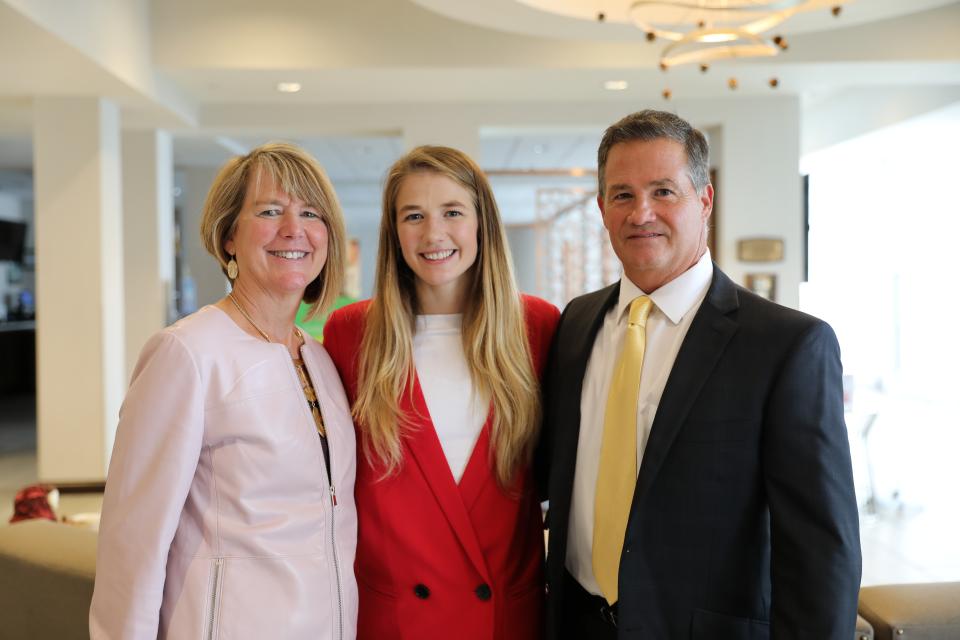 Sarah Hildebrandt with her parents Nancy and Chris

In a surprise announcement made by P-H-M Education Foundation Executive Director Mari Linn Wise, Penn 2011 alumna and World Championship Wrestler Sarah Hildebrandt (and the rest of the 300+ luncheon attendees) learned that Chris and Nancy Hildebrandt had donated $15,000 to PHMEF to name the wrestling room at Penn High School “The Hildebrandt Family Wrestling Room!” The gift was made through PHMEF’s Naming Rights Campaign. 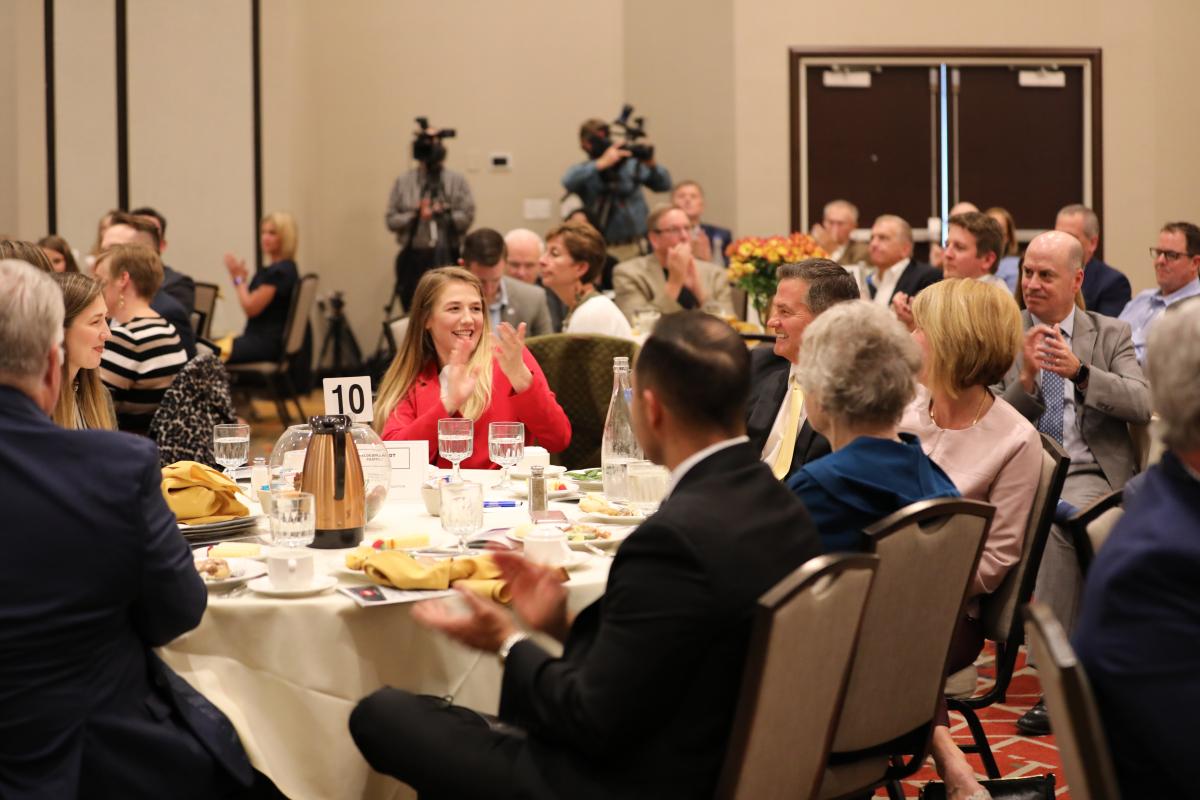 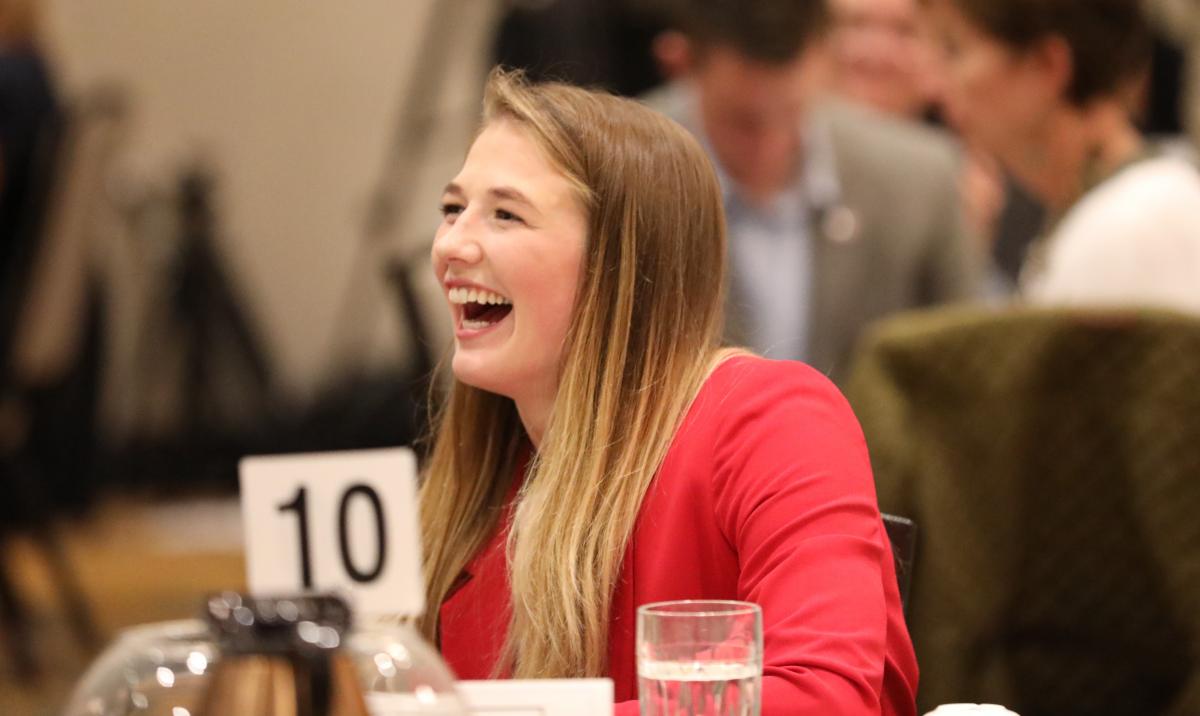 The mission of the Education Foundation is to develop alternative sources of income to support education initiatives in the School Corporation by strengthening partnerships between the community and the District. Per PHMEF’s naming rights fundraising initiative, 80 percent of the donation will go into the Foundation’s endowment, which will in turn provide alternative and additional funding for various co-curricular and extracurricular programs. The remaining 20 percent will directly fund professional development initiatives for P-H-M teachers.

Sarah was the featured speaker at the annual luncheon. She was joined by her family Mom and Dad Chris and Nancy Hildebrandt, brothers Drew and Cory, sister Amy, and her grandmother. Sarah was just as surprised as everyone else to learn of the donation. Click to see all the highlights of the 2019 Superintendent’s Luncheon. 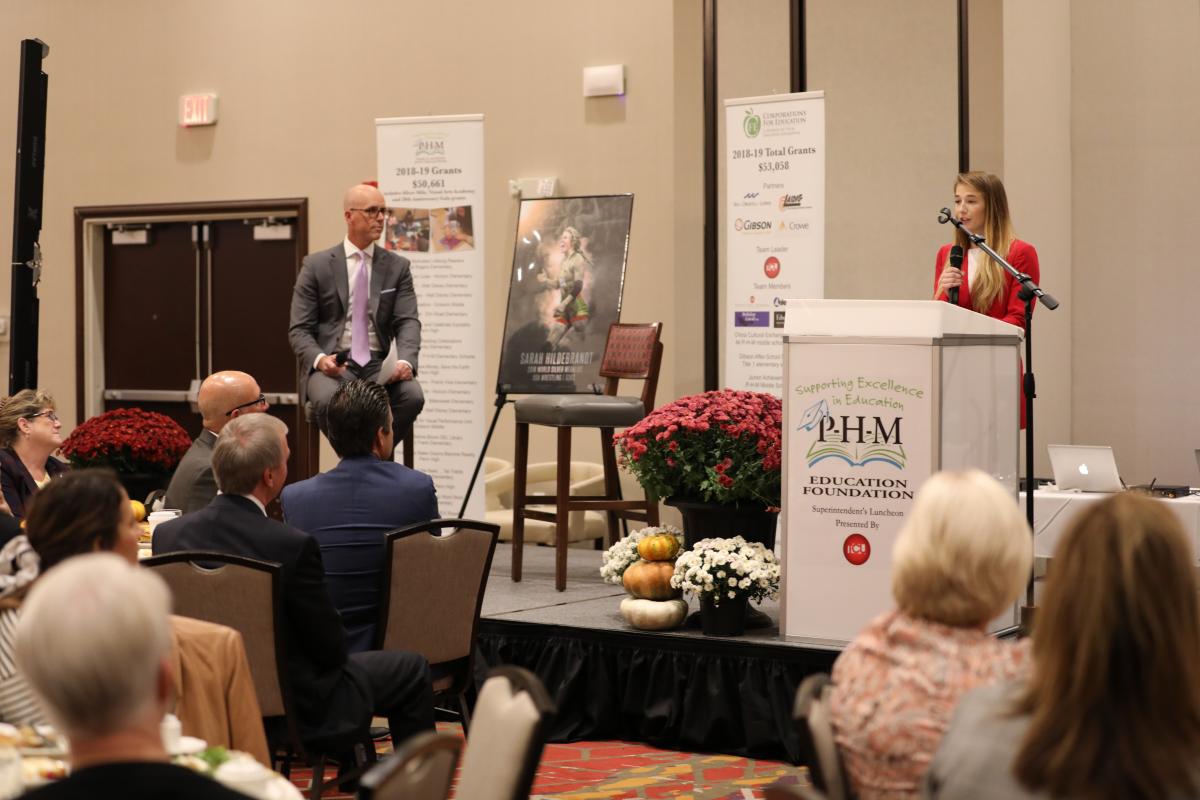 Sarah got her start in wrestling when she was in middle school. At Discovery she wrestled under Coaches Raoul Donati and Scott Vandergriff winning the Big 11 Conference!

Sarah got a very enthusiastic “Welcome Home” from the Luncheon crowd, thanks to Coach Harper who was thrilled to introduce her to the crowd. And Sarah did not disappoint with her heartfelt “Thank You” to all her teachers and coaches throughout her years as a P-H-M student. Sarah’s Discovery Middle School teachers and coaches were also present. 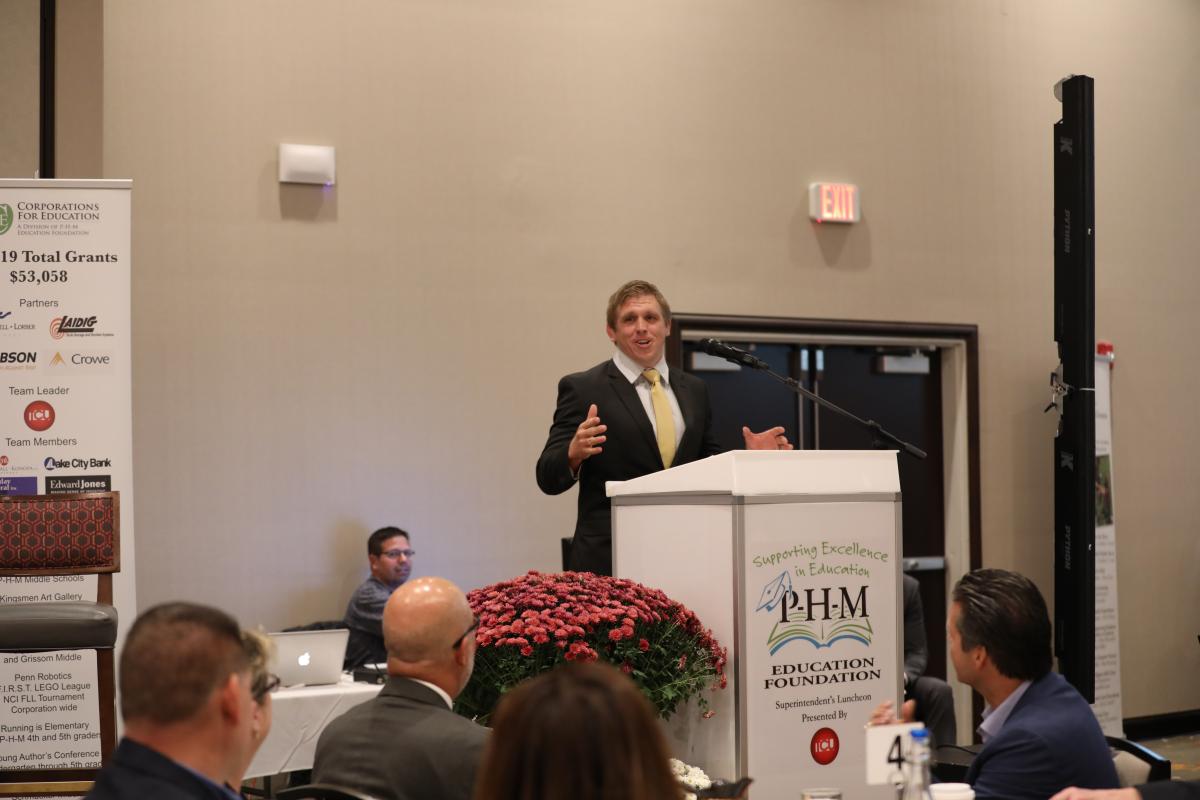 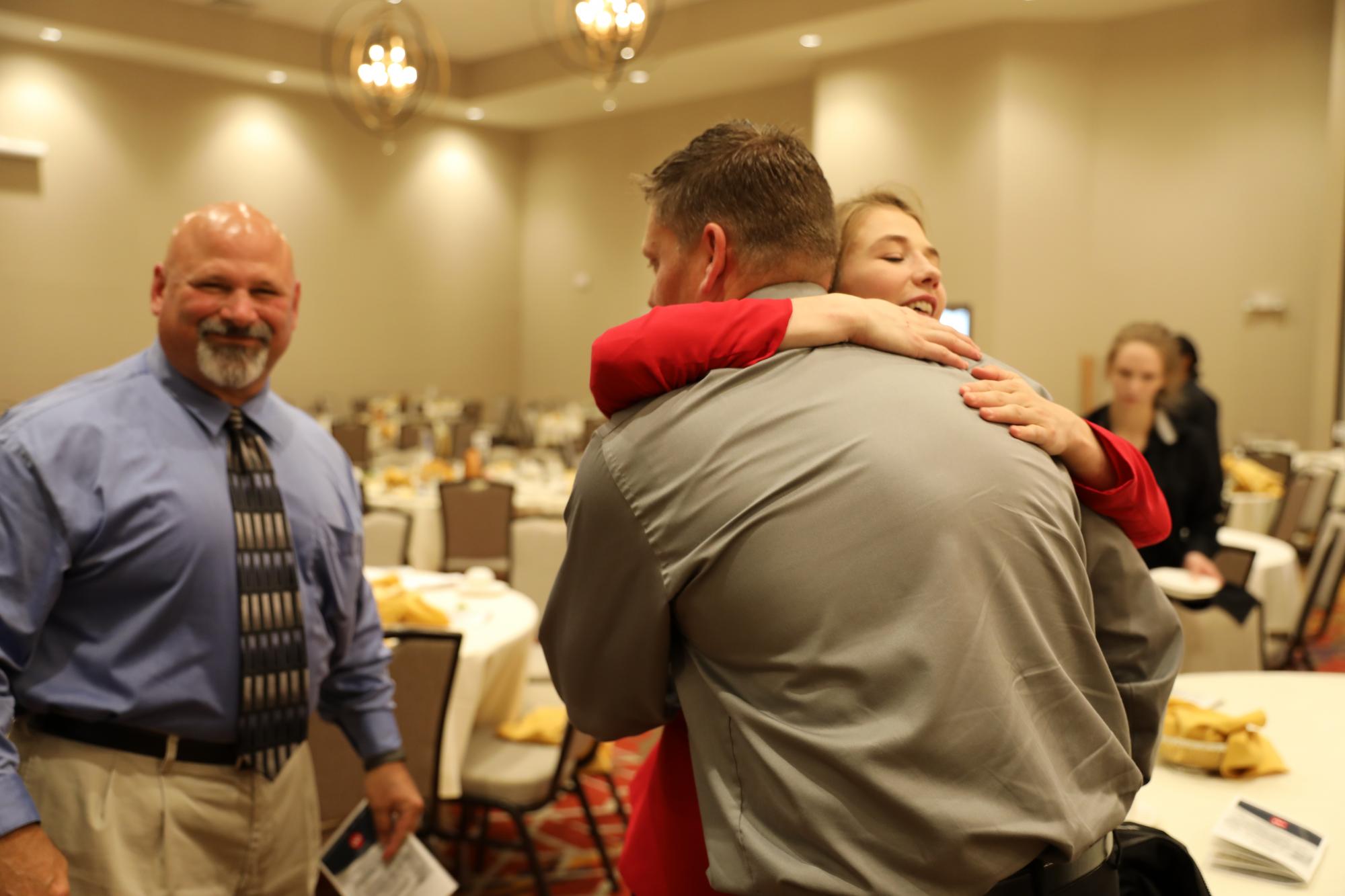 Her list of accomplishments since leaving Penn are long … This past August she earned another gold medal at the Pan Am Games, making that her 4th gold medal at Pan Am Games. She also won gold in 2013, 2015 and 2018 for USA Wrestling. Hildebrandt was the 2018 USA Wrestling Women’s Wrestler of the Year and also earned the Outstanding Wrestler Award at the Pan Am Games in 2018. She was last year’s U.S. Open champion and was a world silver medalist. 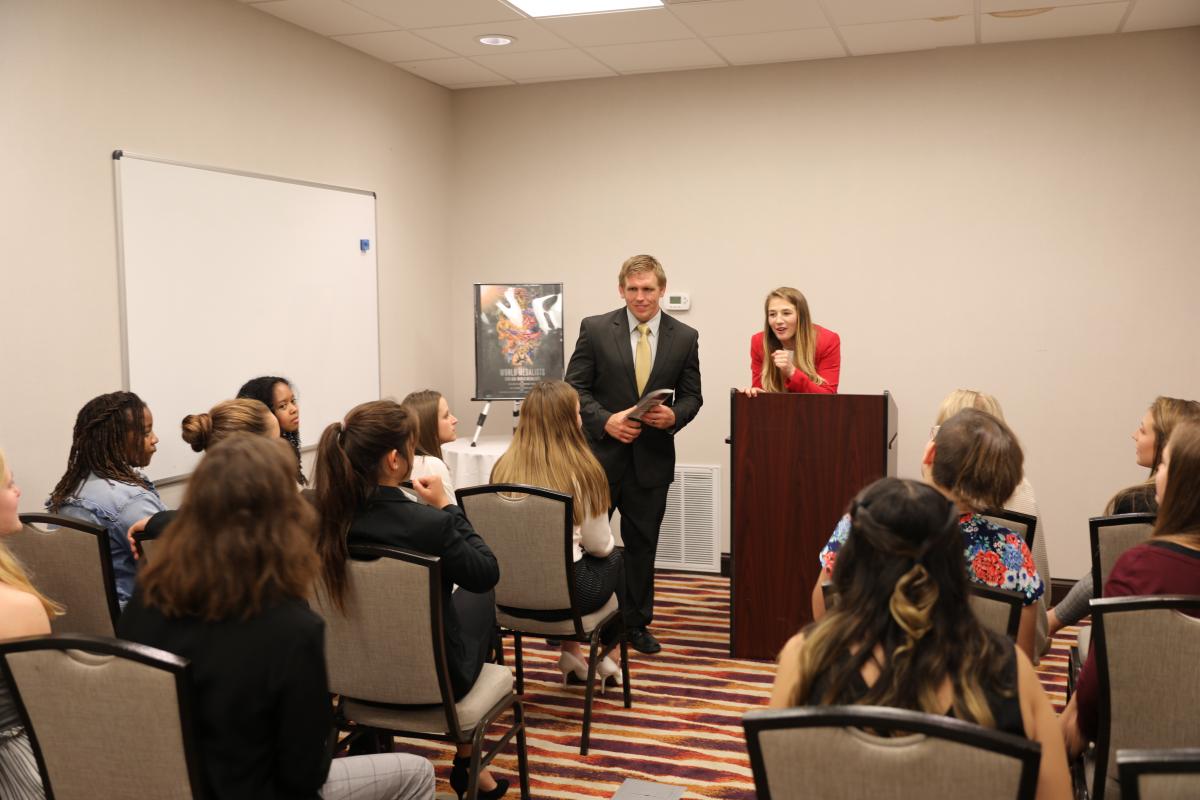 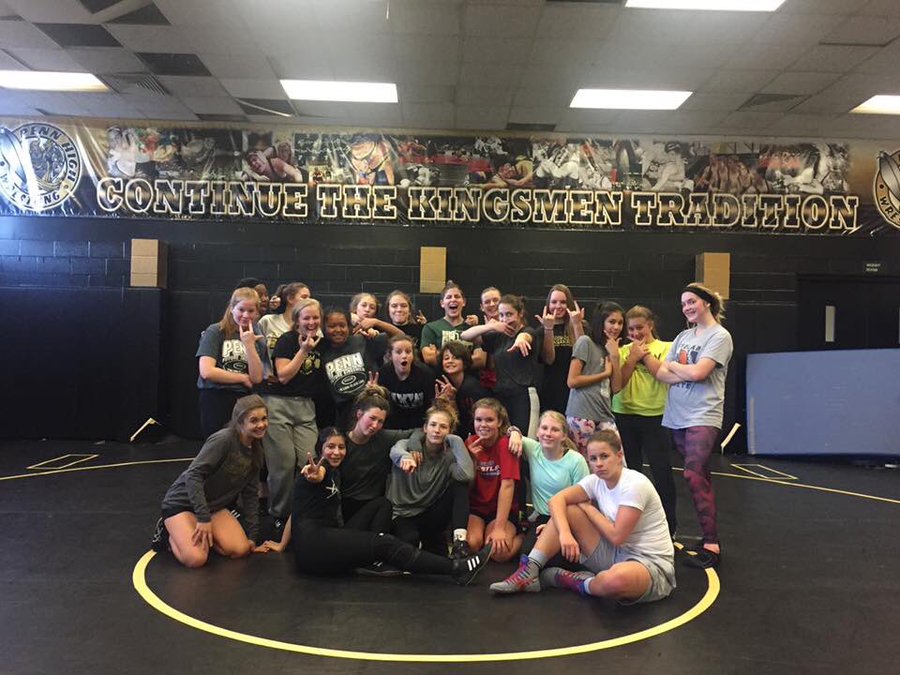 She was more than happy, elated and exuberant actually, to share her story with Penn’s current Female Wrestling team who attended the Luncheon as as Sarah and Coach Harper’s special guests. The students had a chance to practice with her on Monday evening. And after the Luncheon, they got to enjoy some “one-on-one” time with Sarah where she answered their questions about juggling wrestling, academics in high school and college, as well as how hard it is to compete in a male dominated sport. Sarah did a great job of not only giving great advice, but inspiring the next generation of female wrestlers! Click here to see the full photo gallery.

She truly is a Kingsmen Making a Difference!

Penn-Harris-Madison is pleased to introduce Naviance Student as a comprehensive website that you...

Athletics Physicals at Penn set for Tuesday, May 19